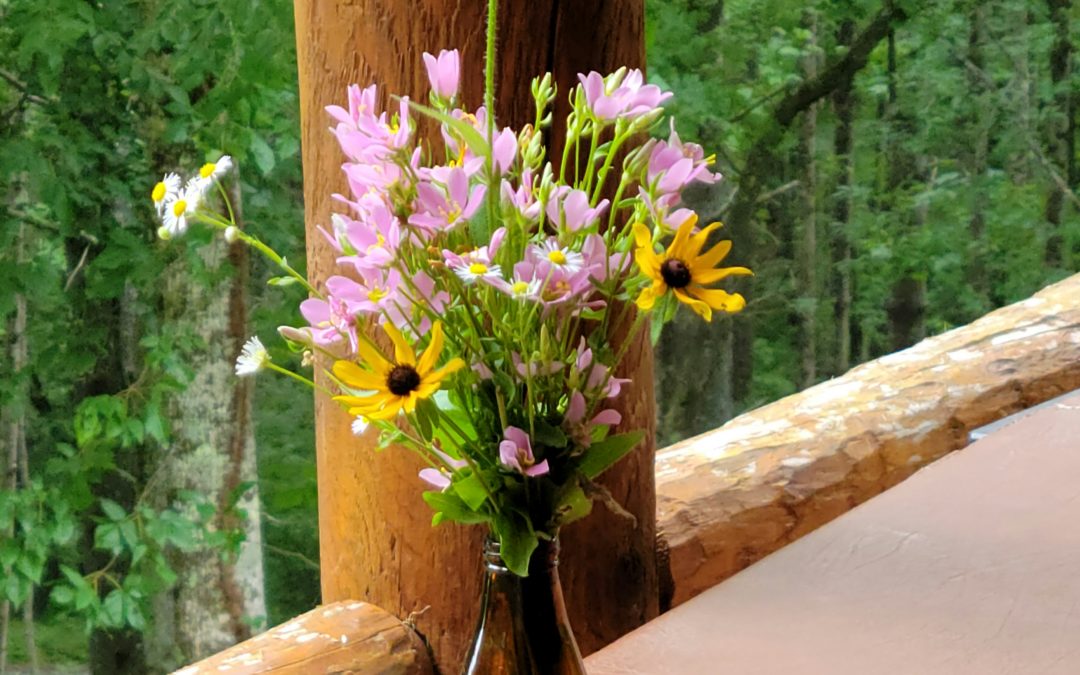 On a recent getaway to a favorite spot, I was reminded of a friend’s similar journey. Her family was returning from a vacation when they encountered car trouble and became “stranded” in a beautiful mountaintop setting, while they tried to figure out the details of a major repair after hours on a weekend. While her husband stressed, my friend decided that nothing could be done and therefore she would trust for the answers to come.  Instead, she picked wildflowers, set them against a beautiful view, and waited for God.   So simple, yet powerfully true.

Recalling this story, I was inspired to do the same, as my husband and I retreated from recent stressors to refocus, restore and find rest. We had just arrived, unpacked, and settled into our favorite spot ready to absorb the needed rescue, when I spotted the wildflowers. They were growing on a rocky bank, standing amidst weeds of every sort, but a beautiful creation none the less, thriving in the sunshine. After a short hike in the woods, my husband returned with an old bottle that had been discarded, near an old cemetery. Its contents had been emptied long ago. Instead of refreshment, the bottle was filled with dirt and debris and its outside was covered in mud.  A gentle cleansing produced a clean vessel which was beautifully amber in color.

I couldn’t help but draw comparisons as God began to speak to my hurting heart.  We had arrived discarded, filled with debris and needed a fresh touch of his gentle cleansing. Moreover, we needed new growth. I remembered the wildflowers nearby and went to retrieve them. Later, I would see that the discarded bottle, that had been cleansed also had found new purpose. I knew our soul was longing for this truth.

The wildflowers would continue to remind me of God’s sweet surprises, amid uncertainty. He had provided encouragement long before we had arrived to our oasis. It was ours, waiting there for us to unpack our burdens and give them over to His care.

Perhaps you have hurts that need unpacking.  In Matthew 11:28, Jesus beckons us to rest when we are weary and carrying heavy burdens. Take his yoke, which is his gentle teaching and let it feed your soul.   Along the way, I hope you find wildflowers.